The Holy Hill near Olomouc 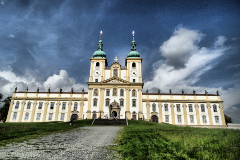 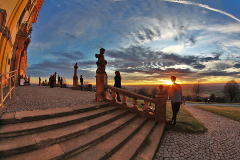 The pilgrimage site Svatý Kopeček (The Holy Hill) is part of the city of Olomouc. It is located about 8 km from the Olomouc city centre. Today's pilgrimage area on the Holy Hill with a residence and a cloister was built on a traditional pilgrimage place. A small chapel was built here around 1632. According to legend it was founded by an Olomouc citizen and wine merchant Jan Andrýsek. He was asked in a dream by the Virgin Mary to build the chapel.

The Church of the Visitation of the Virgin Mary is unique for its orientation. The main axis is not directed from east to west, but the church is rotated with its front to the “mother convent” Hradisko. The priest who blessed the faithful from the altar blessed so by open doors the monastery as well. Today, the fame of the pilgrimage site has been restored and every year unforgettable pilgrimages, worships and church concerts are held here. The church was elevated by Pope John Paul II. to Minor Basilica in1995. The church with its side wings and a four-row linden alley makes a cross visible from far away.

Near The Holy Hill (300 m) there is the Olomouc ZOO interesting through its large collection of sea animals - sharks, piranhas, coral fish and others. 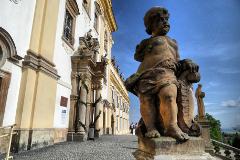 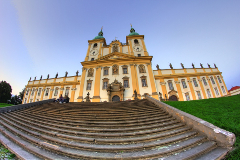